Why we need software updates for IoT devices?

Modern IoT Devices can be very different: from very simple embedded devices to very powerful boards, based on different architecture.

Software for IoT devices can be considered in several groups:

Nowadays it is realistic to have not only back-end services, implemented as containers, but also to have containers, running on the devices.

Containers are well-positioned to address some of the main challenges that developers face when deploying software to IoT devices:

In the embedded devices it is possible to configure container engine and run containers, complying to the OCI Image Format or Docker Image Specification .

Modern IoT devices software update systems have several components, which can be considered on the conceptual level, agnostic to the type of the software

Metadata can be stored in several places:

3. Software to manage updates:
it could be various: from extended standard Linux commands like apt-get to specific applications to manage the whole download process.

Below are listed several most used options:

If the IoT devices run Linux-based OS commands like apt-get could be used to download packages from different repositories.
The general consideration is related to the security and flexibility to extend these tools.

Solutions with FTP server are possible option, but it depends on the current implementation and configuration. Possible issues are again security, scalability, high availability, multi-tenancy.

IoT Gateways like IoTHub can support embedded features to transport updates: It could be using messaging with additional logic to split and join the package / container parts, because of the message size limitations (256KB for IoTHub).
There are some new feature like IoTHub Device Streams (in preview), considered mostly for remote monitoring which can be used for software update if there is not very high number of devices per IoTHub . 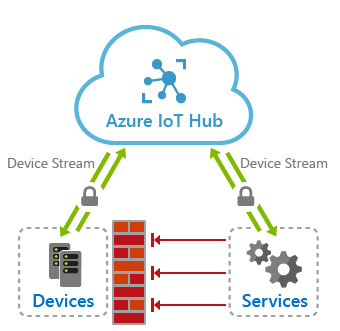 Custom solutions: this approach includes any kind of custom implementation (for example Restful services), which can be used to download software updates.

There are two common concepts, related to software download when you have solution which need to update the software on IoT Devices:

The first approach requires to configure a separate endpoint for download the packages from the back-end.
This endpoint need to be secured and configured separately . Pure download implementation is simpler, but the solution needs to support different channels and separate configuration for download and messaging.

To do firmware update using only what’s available publicly today in IoT Hub, you’d probably start by sending a cloud-to-device message to your device. Of course, exactly how you go about downloading and updating the firmware after that is specific to your device and scenario.
This approach is more clear from the architectural point of view, because only one communication channel is required, but it needs additional logic to split and merge updates.

5. Synchronization between  devices and back-end about upcoming updates. 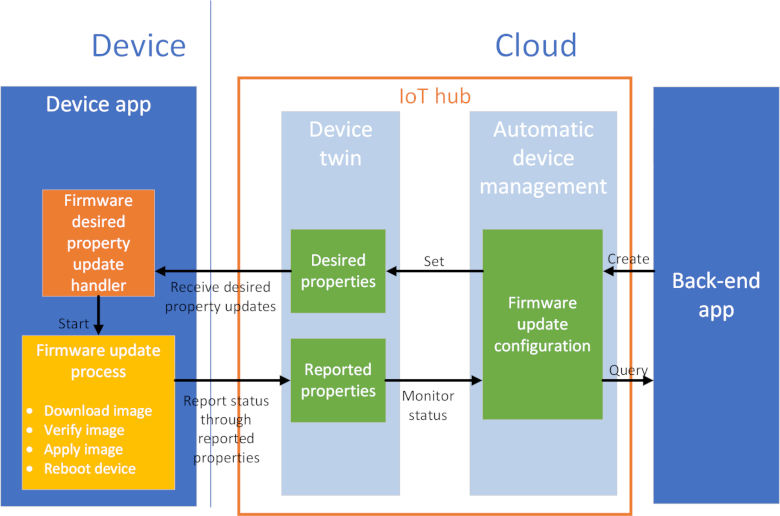 6. Software Bundling: this is the approach to group updates on the logical (sometimes also in the physical) level into so named “software bundles.

7. Campaign Management
To have the full coverage of the concept of software update we need to discuss also non-functional requirements like performance, scalability , availability etc. and the related to these requirements functionalities like campaign management, which we will cover in some of the next articles.

You can learn more also if you follow me on Twitter @mihailmateev , and stay in touch on Facebook, Google+, LinkedIn and Bulgarian BI and .Net User Group !